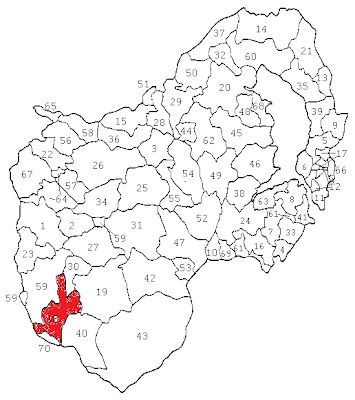 We have already examined some traditional Clonduff and Kilcoo surnames on this site but lets have a look at another neighbouring parish to Clonduff, Clonallan.

Some younger readers unfortunately may not be aware of Clonallon however, knowing it by the names Burren and Mayobridge, these areas being considered distinct today.

These are the most common surnames in Clonallon in 1863-64.

Rooney remains a very common name in the parish. From the Irish Ó Ruanaidh, Ó Ruanadha in South Armagh ["Pron. ă roo′-noo (S Armagh, SÓhA) - Duibhin] but very much a Co. Down name.

Byrne ( 30), Byrne is an anglicistion of Ó Broin, but this name normally anglicised to Burns in South Down. Did this family name undergo further anglicisation?

Grant (26). Contrary to common belief, this is native Irish name. From the Irish Mac Gránna.

Fagan ( 21). Remains common in South Down. From the Irish Ó Faodhagáin, meaning decendent of little Aodh.

McAnulty (20). From the Irish Mac an Ultaigh, son of the Ulsterman.

Murphy (16). From the Irish Mac Murchaidh

Keenan (15). From the Irish Ó Cianáin