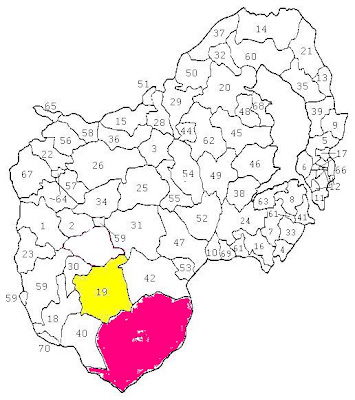 Cunningham (180), A Scottish surname but one used widely to Anglicise Gaelic surnames, as most certainly in the case here. In South Armagh Cunningham seems to be an Anglicization of Ó Cuinneagáin, [Pron. ă Kŭn′-ă-Găan or Kŭn′-ă-hăn (S Armagh, SÓhA) (Duibhín)]. Interestingly however Bell states that in South Down "the MacDonegans changed first to MacConegan and then to Cunningham". This would indicate a development form an Irish Mac Donnagáin > Mac Dhonnagáin > Mac Connagáin > Cunningham. Donnagáin mean 'small brown (haired) person.'

Sloane (143). From the Irish Ó Sluagháin (now written Ó Sluáin). Sloan is also a 'Scottish' surname but is ultimately in that case of Irish extraction. The name Sluaghán signifies 'hosting or army' (MacLysaght).

Rogers (56). An anglicisation for the Irish Mac Ruairí. Rodgers was alternatively anglicised in the Mournes as McCrory within living memory.

Hanna (49). From the Scottish Gaelic, Ó hAnnaidh. One of the few Scottish Gaelic names to take the prefix 'Ó' meaning grandson or descendent rather than 'mac'.

Moore (38). Can be of Irish origin but that is unlikely in this case.